“Do you know how many times I’ve come to this arena? And now, they’re opening the doors for us,” Lady Gaga says at the beginning of her HBO special. Thus illustrates the selfless persona of the pop culture entity that is Lady Gaga.

Lady Gaga returns home to New York City on one of the best HBO concert specials in recent memory. There are two facets to Lady Gaga presents The Monster’s Ball: At Madison Square Garden that make it utterly brilliant. 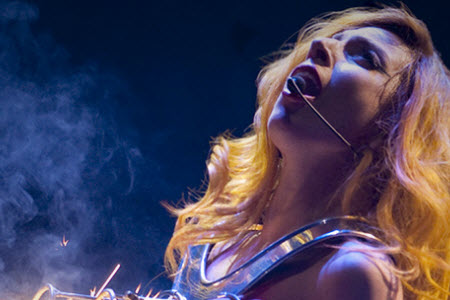 First, the audience garners a feeling that the Madison Square Garden performance for Lady Gaga is a homecoming. Monsters Ball Live is certainly that and so much more. Secondly, Lady Gaga rocks the stage like no other!

Gaga hits the stage after an emotional opening and it’s off to the musical mastery of showmanship that is Lady Gaga and her live show. By her second song, Just Dance, it is clear this is not your ordinary HBO concert special. It’s Lady Gaga and all her gregariousness.

HBO has scored a coup by broadcasting the Lady Gaga special on Sunday, May 8. Mother’s Day has never had such a soundtrack. With each successive song, the New York City raised artist shows why she is the embodiment of the American-New York City success story. Her banter between songs showcases a side to Gaga that has only previously been hinted at before.

Even though the song list runs the gamut of meteoric hits, the theme is visibly a mantra of embracing one’s self. Born This Way, the title track from Lady Gaga’s latest and greatest, permeates throughout. With her lyrics, in-between-song chats and stage presentation, the singer manages to create an air of expectation that only increases with each new element of the Lady Gaga live performance.

HBO’s live concerts have an illustrious history of bringing astronomical shows to the masses that are only truly attained by thousands of fans in each arena where the superstar artist performs. With the Lady Gaga presents The Monster’s Ball: At Madison Square Garden premiere, that tradition of musical excellence on HBO continues. The pomp of music’s newest and most popular chameleon comes home through Gaga’s sharply choreographed dance sequences, her astounding vocal prowess, an explosive stage show and the veracity of her hit list. Telephone, Poker Face, Born This Way, Love Game and Bad Romance are merely a sampling of the track list that will astound.

Lady Gaga and HBO are a musical marriage matched in heaven. Her ability to do and say what she wants is merely the icing on the cake that is the wonderful experience of Lady Gaga presents The Monster’s Ball: At Madison Square Garden on so many levels.