Jillian Michaels will be leaving The Biggest Loser at the end of season 11 — and has signed a multi-year deal to be co-host of The Doctors. 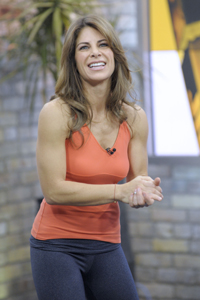 Jillian Michaels rose to fame as the tough-as-nails trainer on the hit reality show The Biggest Loser. She announced in December she would be leaving the show after season 11 to focus on “becoming a mom and doing more charity work.”

“How many times can I scream last chance workout?” Michaels said. “This job is all consuming. It’s seven days a week. I want to start a family. It’s time.”

So what will her new gig on The Doctors entail? She will focus on “wellness, prevention and lifestyle dynamics,” producers of the show said. She will join the other Doctors co-hosts that consist of Travis Stork, Jim Sears, Lisa Masterson and Drew Ordon. In addition, she will be a special correspondent on Dr. Phil.

“This is literally the most informative show in daytime, and it allows me to continue to educate people on how to make powerful health choices enabling them to take control of not only their physical well-being, but every facet of their lives,” she said. “I have thoroughly enjoyed the time I have spent as a guest on the show and becoming a permanent member of the team makes today one of the best yet.”

In addition to her new job on The Doctors, Michaels wants to adopt a child from Africa. She reportedly has medical issues that prevent her from getting pregnant and she says she wants “Africa to be part of my life.”

Tell us: What do you think about Jillian Michaels joining The Doctors?