Prince William and Kate Middleton are gearing up to be parents! No, they aren’t pregnant yet (at least, as far as we know), but the royal couple did just adopt a baby penguin! Say it with me, Awww… 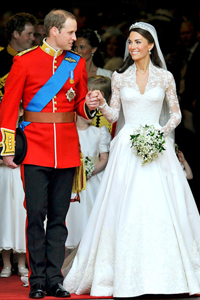 Do-gooders Prince William and Kate Middleton are practicing to be parents by adopting an endangered baby penguin whom they have named Acorn.

“It’s a real honor to be able to boast Prince William and Kate as penguin adopters,” a zoo rep said in a statement. “And hopefully the happy couple will come and see little Acorn playing in his pool very soon.”

That is right, the busy royal couple has yet to see their adopted penguin. Apparently, the penguin was given to the couple as a wedding gift from the Chester Zoo in England. In fact, the zoo had people vote on which animal William and Kate should adopt — and the penguin won by a 20-percent margin!

“Rothschild giraffes and African painted dogs were a distant second and third, with other notable suggestions including royal starlings Billy and Nate, a grey crowned crane and a black rhinoceros,” the zoo spokesperson said.

Acorn’s mother gave birth to him — and his nine brothers and sisters — in late April.

Although William and Kate are not quite ready to be called mom and dad, insiders say they do have special names for each other — besides their new titles as the Duke and Duchess of Cambridge. “For day-to-day life, they are the Cambridges,” a source tells Us Weekly. “But behind closed doors they are calling each other Mr. and Mrs. Wales. It’s cute.”