Justin Bieber’s crew members are refusing to perform in Japan in two weeks over fears of radiation, but the Biebs says he will go — with or without them. 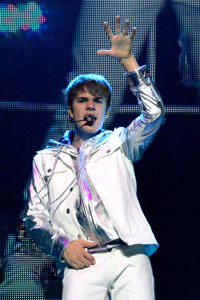 Justin Bieber is scheduled to take his Never Say Never tour to Japan in two weeks, but his crew members want to cancel the trip over fears of radiation from the recent nuclear disaster.

Bieber is supposed to perform in Osaka on May 17 and Tokyo two days later, but crew members are insisting they cancel it.

The Biebs’ manager, Scooter Braun, is furious at the crew, telling them at a meeting: “Man the (expletive) up and do the right thing by these kids.”

The government has assured Bieber and the crew that it is safe to be in Japan, however, the crew remains divided.

Other performers, including Avril Lavigne and Slash have both canceled their Japan concerts but Maroon 5 is performing in Japan on schedule.

What will Bieber do if his crew refuses to go? He says he will still go — even if it is a one man show! He says he will do smaller venues if he doesn’t have the manpower for the stadiums.

Tell us: Do you think Justin Bieber should go to Japan?