No matter what other screen success Tom Hiddleston has in the future, his experience making Thor will always be tops. The UK-born actor told us in our exclusive video interview that as an English actor, working and spending time with UK legends Anthony Hopkins and Kenneth Branagh was a priceless experience.

Tom Hiddleston relished the opportunity to be directed in Thor by the master Kenneth Branagh and recalls a particular scene where it was only the three British artists standing alone. His emotional account will make even the most hardened anti-Hollywood person’s heart warm. Regardless of a person’s line of work, Hiddleston’s description of the career-topping moment is one to treasure. 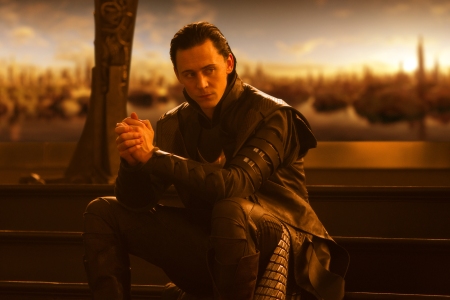 Hiddleston already has an accomplished career of his own. A talented stage actor, like his hero Branagh, Hiddleston became exposed to wide audiences with a series of unforgettable turns in BBC films including Miss Austen Regrets, Wallander and Return to Cranford.

Securing the role of Loki in Thor, Hiddleston reveled in playing the younger brother to Thor. Loki feels he is more fit to take the throne from his father King Odin (Anthony Hopkins) than his out-of-control brother Thor (Chris Hemsworth). The trio form a Shakespearean dysfunctional royal family that in the hands of director and noted Shakespeare expert Kenneth Branagh is terrific to see unfold onscreen.

Without Hiddleston’s powerful performance, the intensity of Loki, Odin and Thor’s power play would fall flat. He is as much devious as he is devilish, while simultaneously managing to capture his character’s utmost devotion to his father that lies at the heart of the Thor plot.

Hiddleston is certainly ready for his spotlight. Exquisitely trained and possessing natural big screen power, Hiddleston’s days of working alongside screen legends are only beginning. His next film is the perfect example of that — he’s starring in Woody Allen’s latest, Midnight in Paris.