The weekend is almost here! We’ll tell you what’s hot in theaters, including Chris Hemsworth. Yes ladies, he removes his shirt.

Well, it’s finally here! We’ve got a few days off to check out some films and we’ve got a bunch to choose from. Romantic comedies, the Spanish Civil War, the god of thunder and Mel Gibson with a hand puppet. 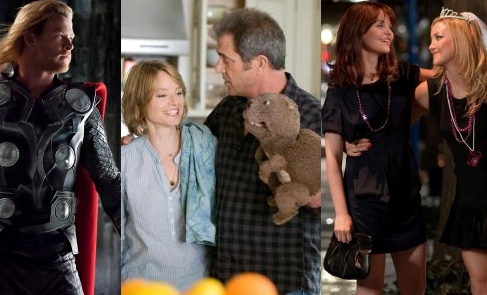 Something Borrowed: Based on the novel by Emily Giffin, this romantic comedy stars Ginnifer Goodwin and Kate Hudson as friends Rachel and Darcy. These buddies are in love with the same man. Dex (Colin Egglesfield) and Rachel had some chemistry six years before, but Darcy swoops in and grabs him. Now they’re engaged. When Rachel confesses a crush right before the wedding, she and Dex sleep together. Let’s just say that causes complications. The film also stars John Krasinski.

Jumping the Broom: Sabrina (Paula Patton) finds Mr. Right (Laz Alonso) and gets engaged. But as you know, a relationship between two people is nothing compared to blending both of the families. When the future in-laws meet in Martha’s Vineyard the week of the wedding, the tension is palpable. Sabrina’s parents are wealthy, while her sweetie’s are a middle class family from Brooklyn. Cultures clash before the big day.

Thor: You’ve seen the posters, you’ve watched the TV spots and if you’re a geek like me, you’ve got the hammer on your desk. In the latest offering from Marvel, we get to check out the origins story of Thor, the god of thunder. Thor (played by the drool-worthy Chris Hemsworth… seriously ladies, it’s like staring directly at the sun) lives in the realm of Asgard with his brother Loki (Tom Hiddleston), his father Odin (Anthony Hopkins) and the other gods. After some family strife, he ends up without his powers on Earth where he meets scientist Jane Foster (Natalie Portman). I’ve seen this one and it’s pretty fantastic! The film is directed by Kenneth Branagh.

There Be Dragons: In this adventure set against the backdrop of the Spanish Civil War, childhood friends Josemaria Escriva (Charlie Cox) and Manolo Torres (Wes Bentley) find themselves on opposite sides of the conflict. One chooses peace and becomes a priest. The other, war. There is love, betrayal and some beautiful imagery from director Roland Joffe.

The Beaver: Mel Gibson returns to the screen after his personal troubles. Gibson plays a man so troubled that he has to relate to the world through a beaver hand puppet. Despite the strange premise, the film, and Gibson himself, are getting positive reviews. The film is directed by Gibson’s friend Jodie Foster and will be in limited release.