Between the fact that Thor is a Marvel Comics mainstay, part science fiction and all geek heaven, the casting of Jaimie Alexander as Thor’s confidant Sif is genius.

Jaimie Alexander is no stranger to the cinematic supernatural as well as mainstream films such as starring opposite Jake Gyllenhaal in Love and Other Drugs. But, she came to prominence as an actress with her turn in the sci-fi TV show, Kyle XY. TV audiences could also never forget her turn in Nurse Jackie opposite Edie Falco. 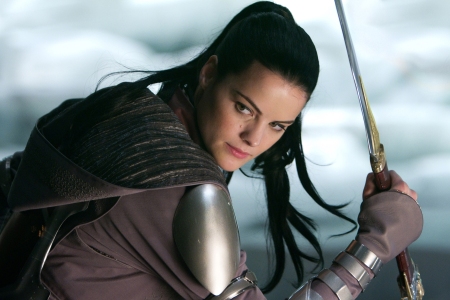 Alexander is only beginning her Hollywood ascent. Upcoming movies for the impressive actress include Loosies with Twilight’s Peter Facinelli and Savannah opposite Jim Caviezel.

In Thor, Alexander got to wield a sword as part of Thor’s (Chris Hemsworth) inner circle of warriors set to preserve the peace in Asgard.

Alexander spoke to us in our exclusive video interview about how much fun, and hard work, it was to get into fighting shape. There was a Thor boot camp of sorts and from the sounds of it, Alexander would welcome another action movie on her resume as the experience was utter bliss. Her experience acting in a Kenneth Branagh-directed film certainly also was a career high.

Ladies and gentlemen, without further ado, we present our exclusive chat with a star of the future, Jaimie Alexander.