The Emily Giffin novel Something Borrowed comes to the big screen with Kate Hudson inhabiting the fan favorite Darcy while Ginnifer Goodwin captures the enduring Rachel.

Emily Giffin’s books have become sacred reading for her fans. Giffin’s millions of readers should be thrilled with the big screen adaptation of Something Borrowed. At the heart of the success of the film version is the effective casting. 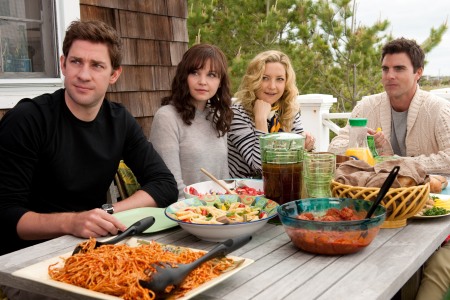 Something Borrowed is the story of two best friends who find themselves in quite the bind. They both have feelings for the same guy. One is engaged to him as the other sits on the sidelines longing for a love connection. Enter the drama: After the longing-for-love character hooks up with the guy, a friendship is tested.

The film’s two main characters, Darcy and Rachel, are introduced at the cusp of one of life’s big moments — turning 30. Rachel is the focus of the film and the book. Ginnifer Goodwin is Rachel in body and spirit. The actress commands each frame of film and to Giffin’s fans, that is the best gift of Something Borrowed.

The key to the character of Darcy is that, although she is hard to empathize with, the audience (and the book’s readers) must be able to still find her endearing and enchanting.

Like Goodwin, Kate Hudson embodies Darcy with exactly what is needed. Darcy is introduced as the center of attention at Rachel’s opening scene birthday party and Hudson never lets go of Darcy’s fierce ability to bring that spotlight onto her. Yet, through Hudson’s performance, audiences catch a glimpse of what lies underneath Darcy — her arrogance comes from deep insecurities that she never lets rise to the surface. 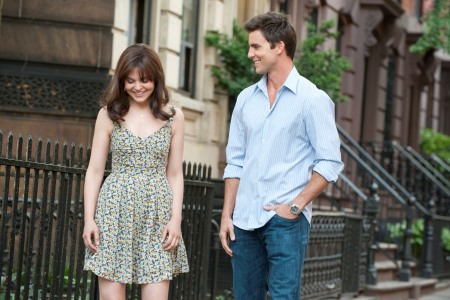 John Krasinski also shines in his role that can almost make us forget him as Jim from The Office, which is saying something! Krasinski is Ethan, a childhood friend to both Darcy and Rachel. Fans of the book series know where his character is heading, but in Something Borrowed, he is the sole voice of reason. Krasinski shows off his acting chops in a role that is so unlike anything he’s done before. In one scene in particular (involving badmintons), he manages to command the spotlight from Hudson, Goodwin and Colin Egglesfield.

Egglesfield is Dex and although stunningly handsome, he is a bit on the cardboard side in terms of his performance. It is easy to see why these two lifelong friends could have their issues over this guy: He’s successful, stunning and safe. We just wish there had been a little more depth to the Egglesfield performance. That being said, we are seriously looking forward to what the former soap star does next.

Something Borrowed is the perfect date movie. Both guys and gals will appreciate its sweeping statements about friendship, relationships, love and personal wars. Giffin’s characters are well established and their being brought to the big screen causes no loss in the power that is achieved on Giffin’s pages. That is saying something, given the history of page-to-screen efforts in the past. 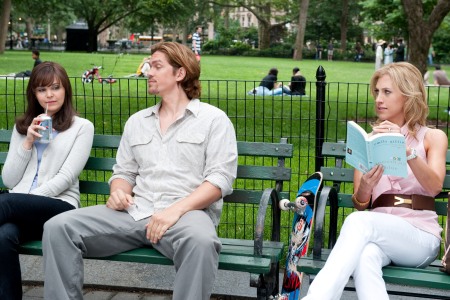 The big question is: Will Something Borrowed resonate with audiences enough to warrant a sequel, the fan favorite Something Blue? We couldn’t be more hopeful. To say there’s an eagerness to seeing where Giffin’s characters go next on the big screen is a gross understatement.

Something Borrowed is also a perfect antidote to the other big film just released, Thor. Where Thor is thunderous, Something Borrowed is subtle in its power and not only perfect for female audiences, but also men. It’s not a chick flick or a romantic comedy. To say it is either would be to diminish what we see on screen.