Paul McCartney is putting a ring on it, again! The iconic musician is reportedly set to marry his girlfriend of four years, Nancy Shevell.

Paul McCartney is hoping the third time is the charm: The legendary Beatles singer is now engaged to his girlfriend of four years, Nancy Shevell. 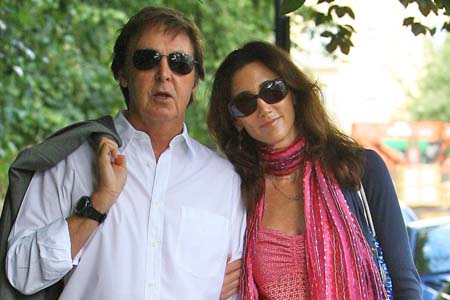 “Nancy and Paul are getting married,” a Shevell source told People. The 51-year-old bride-to-be is a businesswoman in New York City.

“They have the right chemistry,” the source continued. “They’re both cool, chilled out and optimistic.”

McCartney, 68, and Shevell met at a 2007 event in the Hamptons. The 17-year age difference doesn’t seem to matter to the “perfect pair.”

“Having gone through a difficult period, he’s in a much better place,” a McCartney source told People after they started dating. “He’s very happy.”

The couple — who most recently stepped out together at the 2011 Met Gala — are “very positive, laid-back people.” And hopefully this marriage will work out better than his relationship with Mills: Their divorce cost McCartney nearly $50 million.

“I just like being in love,” McCartney said in 2008 of his new relationship with Shevell. Well, love is all you really need after all.