It’s a boy for Spice Girl alum Emma Bunton! The artist formerly known as Baby Spice has given birth to her second child, a boy named Tate. 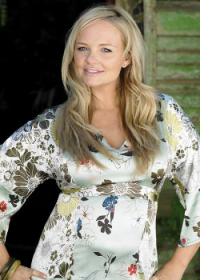 A rep for Emma Bunton confirmed the baby news saying, “Both mother and baby are doing well, and the family are over the moon and would like to thank everyone for their kind wishes and support.”

On Friday morning Emma herself took to Twitter to send out a quick message to her fans. “Our beautiful son Tate has arrived safe and sound! We are all so happy and excited. Thanks and love to you all.”

Tate is an English name meaning “to be careful.” Emma Bunton became engaged to Tate’s father, singer-turned-chef Jade Jones, this past January. The pair are also parents of 3-year-old son Beau.

Emma and newborn Tate are about to be in good company, as two of her Spice Girl bandmates are also pregnant!

Melanie Brown (that’s Scary Spice for those of you keeping track) announced in March that she and husband Stephen Belafonte are expecting their first child together. Mel B has two daughters from previous relationships and Stephen has one of his own.

In stateside news, Victoria Beckham (once known as Posh Spice) is pregnant with baby number four! The singer/designer and husband David Beckham will be welcoming a daughter to their brood currently residing in Los Angeles, which includes boys Cruz, Romeo and Brooklyn.

Congratulations and best wishes to Emma Bunton and all of the pregnant Spice Girls!