George Clooney is celebrating the big 5-0 today! Will we see him in theaters this year?

There’s that old saying that men get better with age. Not all men, mind you (beer bellies come to mind), but George Clooney fits that description well — and he’s turning 50 today! 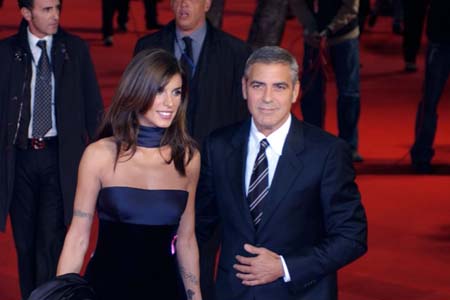 And how is Mr. Hotness celebrating his big day? We’re not really sure, there isn’t a huge party planned, but his hot Italian girlfriend, Elisabetta Canalis, gave him a sexy present in the form of naked PETA ads.

Sadly, Clooney hasn’t been making his rounds in public lately. We miss seeing that sexy mug on the cover of our favorite magazines. Luckily, we will see the birthday boy in a couple of movies this year.

Clooney is starring in The Descendants, a film about “a land baron [who] tries to re-connect with his two daughters after his wife suffers a boating accident,” according to IMDB. Clooney is playing Matt King, who we’re assuming is the land baron mentioned in the synopsis. It’s scheduled to be in theaters in December.

He’ll also be starring in The Ides of March alongside Ryan Gosling and Marisa Tomei. Clooney plays Governor Mike Morris in the film about “an idealistic staffer for a newbie presidential candidate [who] gets a crash course on dirty politics during his stint on the campaign trail.” It’s scheduled for release in October.

We’ll deal with your absence from the public eye now, George. Call it our birthday present to you. All bets are off this fall, though.