Most girls can’t wait to plan their wedding — but not Kristen Bell! She recently said that a wedding ceremony between her and fiancé Dax Shepard is not that important to her. 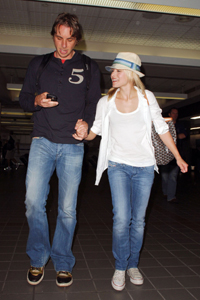 Scream 4 actress Kristen Bell is just not that into weddings. She got engaged to Parenthood star Dax Shepard in February of last year, but they have no plans to get married.

“We’re just not having a wedding, so there’s no story to report there,” she told UsMagazine.com. “I mean, we’re still getting married, but we’re going to do it whenever we feel like it.”

So, she is either telling reporters that they have no plans to throw the media off track of a huge wedding she is planning — or she really doesn’t care about it.

“The fact that he asked me to marry him is of a little more importance than me planning a party,” she insisted.

Or are they already married? She referred to Shepard earlier this year as her “husband” in a tweet, but has since said they aren’t actually married.

We don’t know what to believe, but the couple does seem like they are happy.

“He constantly keeps me laughing: When I’m sad, mad, frustrated, annoyed. Regardless of what it is he can lighten the mood,” Bell said of her fiancé. “He’s so funny that it’s overwhelming.”