In better-late-than-never news, rocker Bryan Adams has welcomed a daughter! The baby girl, now nearly two weeks old, was born on a holiday that we’re going to go ahead and assume had something to do with the utterly cute middle name she was given. 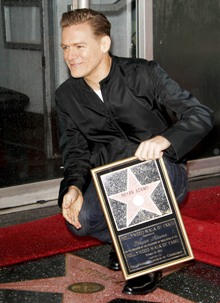 Bryan Adams is a father! The 51-year-old singer and Alicia Grimaldi welcomed their first child on April 22, which just so happens to have been Good Friday.

A rep for Bryan has confirmed the hoppy news to People saying, “I’m really proud to announce on 22 April, Mirabella Bunny was born.”

“She arrived like all good Easter bunnies on Easter Friday,” Adams added. “Mother and baby are both well and happy. Thanks in advance for your kind thoughts and wishes.”

Mirabella is a Latin name meaning “wonderful.” As for Bunny? Pretty sure it still is referencing a little rabbit!

Bryan and Alicia, who is the co-founder of the singer’s charity, announced they were expecting in March. He revealed the news by saying Alicia “helped me start my foundation years ago and it looks like she’ll be running the family now!”

Next month Bryan, seen here receiving a star on the Hollywood Walk of Fame in March, will return to his world tour. No word yet on whether Alicia and Mirabella will be joining him on the road.

Congratulations to Bryan Adams and the whole family!

What do you think of the name Mirabella Bunny?