The bloodshed on this week’s installment of The Vampire Diaries was almost too much to bear. Read on to find out why Mystic Falls will be forever changed, before the finale even airs.

We knew the last episode of The Vampire Diaries before the big finale would be epic. We knew the loss of life would be significant. But what we didn’t know was that it would still hit us like a ton of bricks! Hats off to the writers, producers and actors for turning the tide yet again, even with the finale still a mere week away! 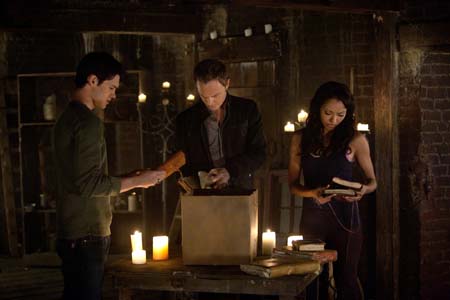 This week’s episode of The Vampire Diaries, The Sun Also Rises, revealed so much heartache and death that it’s best to highlight all the important information, because trust us, you’ll want to know everything! That information comes in the form of the sacrifice.

The sacrifice basically acts like a recipe: You need ingredients to make it work. Those ingredients also come in steps, which first begin with a werewolf. Since Tyler (Michael Trevino) was battling his second transformation, Jules was on deck. Klaus (Joseph Morgan) spared no expense in the gruesome category by ripping her heart out! The horrid part of this is that you saw her humanity at the end. She was simply trying to help Tyler and wanted to protect him. It made everything she did wrong, seem right.

The second part of Klaus’ tragic sacrifice was the vampire — aka Jenna! Jenna and her niece, Elena (Nina Dobrev), shared the most gut-wrenching scenes in what was their final goodbye. They spoke of regret and fear, as Jenna completed the transformation by feeding on the witch Greta’s blood.

Stefan (Paul Wesley) tried to play the hero by trading places with Jenna, but Klaus wasn’t going to let anyone make choices in his sacrifice. Besides, he has something else in mind for Stefan, which I’m assuming we’ll see at a later date! Klaus stabbed the Salvatore brother, rendering him useless!

Poor Jenna tried to fight her way out of the situation but it was no use. Jenna was gone before we could even dry our eyes! Talk about epic turns!

It’s hard to even move on, but we’re not even done. The third stage is the doppelganger! That means Elena!

Bonnie (Katerina Graham), Jeremy, John and Alaric worked overtime to prevent Elena from heading to team vampire after the sacrifice. Here’s the deal: By using a Bonnie-produced spell to keep Elena’s soul together, she’ll come back as a human. Bad news? This means John’s death.

Okay, we never thought we’d actually see Klaus drain Elena of her blood, but we did! We saw her “die” and him turn into a true hybrid!

But hold that thought. Bonnie, Damon (Ian Somerhalder) and Elijah to the rescue! Damon snapped Greta like a twig and grabbed Elena’s body, while Bonnie broke out the voodoo powers! Elijah was the icing on the sacrificial cake!

Turns out, all this time Elijah believed Klaus murdered their family and dumped them at sea so they could never return. Just as Elijah is about to strike, Klaus reveals he has them stashed somewhere. The deal? Elijah will only see them if Klaus is allowed to live. Brilliant, on all counts. They ran away together!

Okay, did that just happen? Oh, yes it did! We still have to wrap this up!

The body count was high including Jules, Jenna, John and Greta but that’s only part of the story.

Matt and Caroline (Candice Accola) broke up after he revealed he was secretly working with Sheriff Forbes and then she got cuddly with Tyler.

There was a private and very sad funeral for Jenna. With all the drama we still have to remember that Klaus is still out there. Oh, did we forget to tell you that Damon is still ailing from the werewolf bite? He’s slowly and painfully going to lose it!

Stay tuned for next week’s season finale of The Vampire Diaries. We hear the loss and rebuilding is even more significant!