Johnny Depp is a sneaky, humorous fellow. When the Pirates of the Caribbean: On Stranger Tides star is booked into a hotel he has a number of odorous aliases he goes by. Our favorite: Monsieur Poopy. 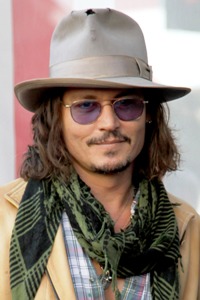 We’re starting to think Johnny Depp may not be the best secret keeper. The Pirates of the Caribbean: On Stranger Tides star has divulged a series of codenames he uses when wanting to stay at a hotel anonymously. He tells Extra one of his favorite moniker’s is “Mr. Stench.”

“You’d start your day off with a smile, just to get that wake-up call at six in the morning, saying, ‘It’s time to wake up, Mr. Stench’ and when you hear it in foreign accents as well, it makes it sound even better,” says Johnny. “Monsieur Stench — and I’ve also been Monsieur Poopy.”

Think he gets that potty-talk from his kids?

“Bob Downey, we’ve known one another for a million years,” Johnny Depp explained. “He and his wife came over for dinner and my son just couldn’t believe that he was sitting next to Iron Man, so I saw Captain Jack leave my son’s eyes and Iron Man was the ticket.”

Pirates of the Caribbean: On Stranger Tides arrives in theaters May 20. Check out a preview and stills from the film here!