Emily Giffin is having a career moment. That’s saying something considering the author has sold millions of copies of her books. Giffin’s Something Borrowed is hitting the big screen starring Kate Hudson, Ginnifer Goodwin, John Krasinski and Colin Egglesfield and the author could not be more energized. 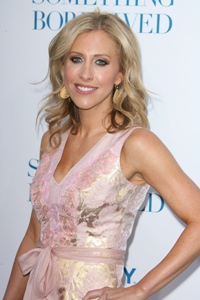 We first caught up with Emily Giffin when she visited the SheKnows Los Angeles offices. Right after our interview, Emily was jetting to New York City to film a cameo in Something Borrowed. Fans of Giffin’s should be thrilled with her scene, it’s perfect! She shares a scene with Ginnifer Goodwin, and fans: Take note — look at what she’s reading!

Emily Giffin phoned us to dish the casting of Something Borrowed and how Kate Hudson is a perfect Darcy while Ginnifer Goodwin shines as Rachel. Giffin fans will not be disappointed. For that matter, given the number of book-to-film adaptations that leave authors reeling, the entire Something Borrowed experience was nothing but utter bliss for the bestselling author and she tells us all about it!

SheKnows: I’m excited to be catching back up with you, especially with the movie of your book finally hitting screens.

Emily Giffin: I know, I can’t believe it [laughs].

SheKnows: How are you feeling? This has got to be a crazy time for you emotionally.

Emily Giffin: It’s so exciting. It really is. I’m just excited because I want all my readers to see this because I know they’re going to love it. I saw it in December. It’s a long time to wait for everyone else in my life to be able to see it too. It’s great.

SheKnows: When we first spoke here at the SheKnows offices you were about to jet off to film a cameo. How was that experience being on set — not just as an observer like most authors, but as a participant? 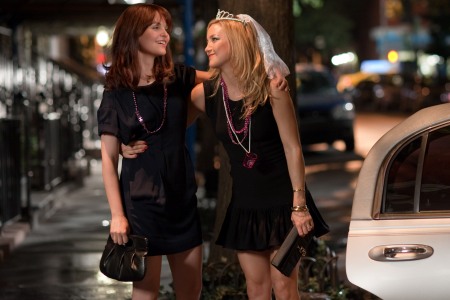 Emily Giffin: It was so nice of them to include me in all sorts of aspects of it. They didn’t have to. They were so generous — the directors, the producers — so it was a lot of fun. I really especially liked the script, the discussions around the script and the character development. That’s obviously what you do when you’re a novelist. What was the most fun? The casting!

SheKnows: The experience of surrendering a book to a movie — it sounds like for you it was kind of a rewarding one.

Emily Giffin: I think that I had low expectations. I was warned that a) I wouldn’t be included, and b) there was a high likelihood that I wouldn’t like the finished product. It might deviate from the book and we all know that in our experience in our going to see the movies from the books that we love. I just told myself the book is the book and this is the movie and just let go of that control emotionally. So the fact that it turned out as well as it did, has been really wonderful.

Something Borrowed: From page to screen

SheKnows: How does it feel for you to see the characters that once only existed in your head up on the big screen? 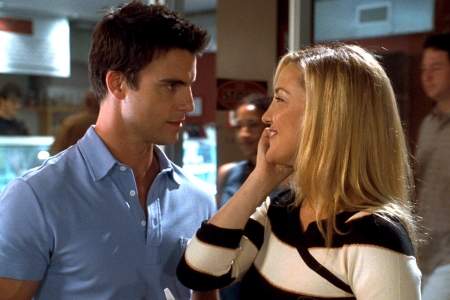 Emily Giffin: It’s very surreal, it really is. It’s thrilling. You create this world and these people, for a time, you’re the only one that knows of their existence. Then you just hope that someone will read about them other than your immediate family [laughs]. Then, for readers to react and respond emotionally is one thing. Then to see it brought to life in a very visual way on the big screen — all those little details, all those little visuals are still there. I had a really clear sense of what Rachel’s apartment looked like in my mind but it’s not nearly as detailed as what you would see in the shot of a movie. To see that and say, “Yeah, I can totally see her wearing that apron, I can see her having that collection of picture frames” — even as a writer you don’t visualize things to that degree. It really feels like it’s coming to life for me in a lot of ways too as well as the readers of these books.

SheKnows: After reading Something Borrowed and seeing the movie, I can’t imagine anyone else but Kate Hudson in that role.

Emily Giffin: I know, I’ve said that so many times. You’re so right. There isn’t. You really think about it, who could pull that off? It is such a tricky role because she has to engender some sort of empathy. You have to feel sorry for her. She has to come across as vulnerable. You have to hate her too because if you don’t hate her, then what the other two are doing becomes so loathsome. It’s a tricky thing and she can switch it over in a matter of seconds. You can hate her and then a look crosses her face and you can feel sorry for her. She’s great. 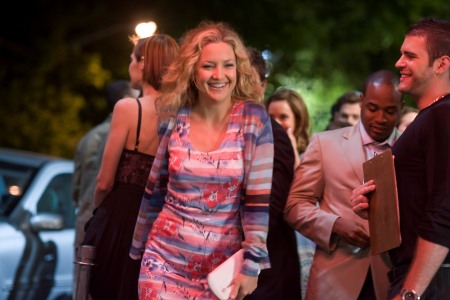 SheKnows: The other end of that spectrum has to be Ginnifer as Rachel — again, a perfect piece of casting. What are your thoughts about not just her, but seeing her and Kate do their thing on screen?

Emily Giffin: I think Rachel (Ginnifer Goodwin) and Ethan (John Krasinski) were so close to the type that I pictured in my head and they nailed it in terms of casting with those two. Meeting Ginnifer for the first time there was a huge second disorientation that happened where I felt like I was meeting Rachel. I was sort of confused and was thinking the name Rachel, but it’s an actress playing her [laughs]. That’s how close I think she was.

SheKnows: I read that you’re writing your own script adaptation of Baby Proof. How is that experience different from writing a book and is it a challenge and is it one that you’ve enjoyed?

Emily Giffin: I did enjoy it. We just finished it. I wrote it with my best friend from high school. He’s a screenwriter and he writes for TV in L.A. It was fun to collaborate and certainly to have that daily interaction with someone. I think that’s the one thing that I miss about being an attorney is just being physically in that law firm and having someone to have a coffee with, to discuss ideas with. Writing is so solitary, especially writing a novel. You can go a week without talking to anyone about your work, longer, a month, so that was a lot of fun. It’s been really interesting to work on something, to see this whole world and be able to parlay some of that skill set into Baby Proof.