Actor Jay Mohr and his wife Nikki Cox welcomed their first child, a boy, on Cinco de Mayo! They named him the unique and gender-bending name of Meredith Daniel Mohr. Let’s discuss! 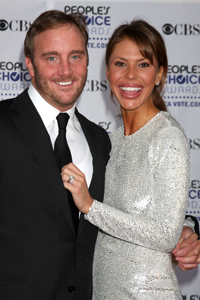 “We are over the moon, filled with joy and every other cliché new parents use. He’s perfect.”

Meredith is the first child for the couple, however, the second for Mohr who has a son Jack from a previous marriage.

It is interesting that the couple chose the name Meredith for their son, which is often thought of as more of a girl’s name. Unisex names are a trend that seems to be gaining popularity (Taylor Swift and Taylor Lautner, for example) but this name is not typically one that is used for both sexes.

Meredith is a Welsh name, meaning “guardian of the sea and great chief,” and is actually listed as a boy’s name! Perhaps Jay and Nikki were paying tribute to their heritage?

It will be interesting to see if they call him Meredith — or by his middle name of Daniel. For this child’s sake (unless they raise him in Wales!), we hope they call him Daniel.

Tell us: What do you think of the name Meredith for a boy?

7 mins ago
by Alyssa K. Davis