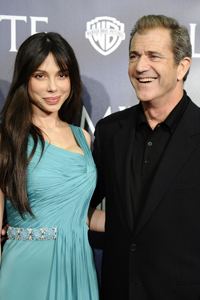 In a shocking move Oksana Grigorieva has asked that the domestic violence accusations against Mel Gibson be dropped so she is freer to communicate with him.

Mel’s reputation has already been trashed by the tapes of his disgusting rants and Grigorieva’s claims that he hit her while she was holding their baby daughter. Now the classical pianist wants the civil judge in their custody battle to remove the domestic violence claim as an olive branch to ease the way for better communication between the pair.

There is currently an order of protection in place preventing Mel from having any communication with Oksana, except for the most benign type of the non-harassing quality, having to do with their daughter. Oksana wants to change that.

Problem is that Mel wants absolutely nothing to do with Oksana and refuses to engage with her, even at doctor’s appointments for baby Lucia.

The request has no bearing on the criminal case. Mel Gibson already pleaded no contest to simple assault charges and is doing community service as his punishment.