For those who are growing tired of American Idol, NBC’s new singing competition show The Voice may be a welcome change. But can it beat the long-standing ratings favorite American Idol?

American Idol’s formula of contestants competing in front of a panel of judges and the American public has been ratings gold for Fox for the last 10 years. It was only a matter of time before a show would come along to challenge it — and NBC’s The Voice appears to be that show. 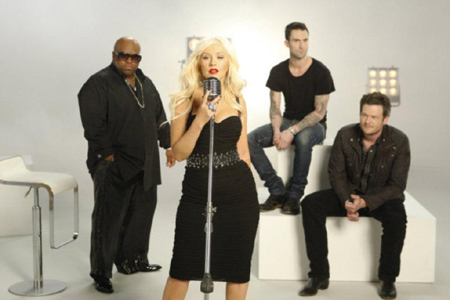 What is The Voice? Four celebrity judges — Christina Aguilera, Cee Lo Green, Maroon 5’s Adam Levine and Black Shelton — will form teams by picking the best singers and compete against each other. The catch is they can’t see the performer. They sit in these cool rotating chairs and must choose the singer by their voice alone — not by their looks. Once they have picked a contestant, their chair swings around so they can see them. The judges will then personally coach their team to compete against each other.

“The people we’re not turning around our chairs for, could win American Idol,” said Levine.

So, how are the judges of The Voice stacking up against American Idol’s Randy Jackson, Jennifer Lopez and Steven Tyler?

The Voice was the first new show to have ratings growth in its second show, reports NYTimes.com, with the only other showing doing that is (you guessed it) American Idol. What was even more impressive was that The Voice beat out Glee and Dancing With the Stars on its premiere night!

American Idol’s ratings are staying strong, however, and the show has proven its staying power.

Tell us: Do you think The Voice will be more popular than American Idol?