It’s Cooper and Charlotte’s wedding day on Private Practice: Something Old, Something New, but with the in-laws in town, will the couple make it down the aisle? With Violet in the hot seat professionally and AddiSam navigating their breakup, everyone at Oceanside is feeling tense.

Charlotte and Cooper managed to survive Charlotte’s violent attack and even last week’s Private Practice drama with her ex Billy, but with their wedding upon them, the in-laws have landed. 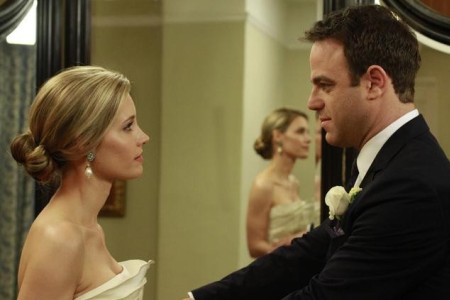 Meeting the in-laws is never easy, but it makes it even harder for Charlotte that Cooper’s parents (Cristine Rose, John Rothman) are wary of the couple’s history and madly in love with his BFF, Violet. Charlotte’s mom (Tess Harper) creates her own issues for the couple, as well.

All the negative energy forces Charlotte and Cooper to second guess the main event, while things get equally tense on the business front at Oceanside.

Katie Kent’s (Amanda Foreman) breach of confidentiality claim against Violet gains momentum this week, putting Violet and her colleagues at risk. With the medical board involved, Pete wants Addison to protect his wife, but Violet insists she has nothing to hide. Katie gave up her right to confidentiality when she cut Violet open, stole her baby and left her to die.

Meanwhile, Addison (Kate Walsh) tries to make small talk with Naomi and when that doesn’t work, she starts to open up about her breakup with Sam. With portrayer Audra McDonald set to exit after this season, however, Naomi isn’t interested in Addi’s efforts to reconnect.

Sam isn’t thrilled with Addison’s antics either. He’s so annoyed with her blabbing about their breakup and the ensuing showdown they have over it that he suggests the former lovebirds may not be able to go back to being friends, after all.

See how the drama plays out on Private Practice tonight, Thursday, May 5 at 10:01 p.m. on ABC, after a Grey’s Anatomy wedding episode. Callie and Arizona are sure make it down the aisle, but do you think Cooper and Charlotte can make it?