Step into your time machine! Paris Hilton and Lindsay Lohan are feuding again like it’s 2006 and we’ve got all the dirt!

It’s no secret that Paris Hilton is desperate for attention — she has made a career out of it, after all. Now the reality star is gearing up for yet another show on Oxygen, The World According to Paris, and is trying every trick in the book to get some publicity. 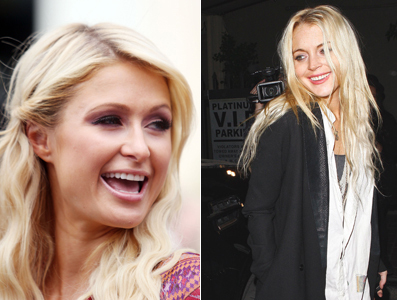 First Paris pulled Charlie Sheen’s ex Brooke Mueller into the show (although rumor has it all her scenes wound up on the cutting room floor after she went off the rails again) and now Paris has resorted to slinging mud at Lindsay Lohan to stay relevant.

Here’s how it went down: Paris was filming scenes for her show while “volunteering” (i.e. creating a photo op) at a shelter when a homeless woman asked if she could have one of Paris’ earrings.

When Paris handed it over, the woman said, “I’m going to give them to my sister as soon as I get back to Oklahoma and I’m going to tell them that Lindsay [gave them to me]… I thought you were supposed to be in rehab?”

Paris’ response? “I’m not Lindsay! If I were Lindsay I’d be stealing the earrings, not giving them away.”

Lindsay Lohan is said to be quite hurt by the slam. According to TMZ she is telling pals, “[Paris] is mean. You don’t have to make fun of serious matters in people’s lives to be funny.”

Actually Lindsay, some people make a nice career out of doing exactly that. Ahem.