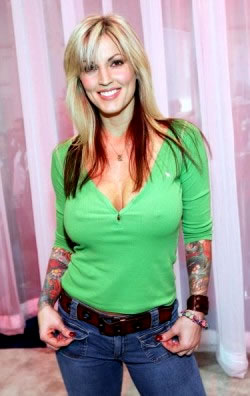 Lindemulder, 42, says she’s sick and tired of the self-serving falsehoods James is peddling on his book tour for American Outlaw. His autobiography, she asserts, is “just one big ‘pity party’ for Jesse. The man lacks accountability and is known to talk only in half-truths. But it’s time he stops treating friends, workers, former business partners and especially women badly.”

What is James’ deal with women? Lindemulder says, “He has a warped and disrespectful attitude towards women and people need to know the truth about that.” Unsurprisingly, their marriage was purportedly “stormy,” and both alleged domestic violence.

Currently, James has sole custody of Sunny and refuses to allow Lindemulder to see her daughter. Lindemulder claims James is responsible for causing herself and her daughter to suffer Parental Alienation Syndrome. “In many ways, it’s worse than physical abuse because it never stops and really affects the way a child views the world,” she says. “I will not stop with my campaign until the day I die.”

As for James, Lindemulder says, once a player, always a player. “He was a player from day one. He was calling me after he married Sandra Bullock.”

We’ll have to wait for the book to get the details on that.