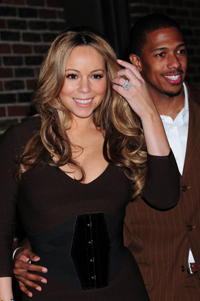 Mariah Carey and Nick Cannon hinted they would be naming their twin babies with names starting with the letter “m,” and, knowing how celebrities love unique baby names, we couldn’t wait to hear what they came up with! They did not disappoint by naming their daughter Monroe and their son Moroccan Scott.

Radar Online caught new dad Nick Cannon out running errands and he shared more about how they chose the names for “dem babies.”

He said he named his son Moroccan Scott because the baby “got the same middle name as me — and Moroccan is like Mariah and my name together. Roc for short,” Nick says, calling it a “strong name!”

Sources are also saying that the name Moroccan is also after the “Moroccan Room” in Mariah’s Manhattan apartment, which is where Nick proposed. Scott is not only Nick’s middle name, as he mentioned, but is also the maiden name of his grandmother.

As for his daughter Monroe, he verified that she was named “after Marilyn Monroe. Cool names.” He goes on to say that the twins “are already more famous than me.”

His daughter Monroe does not have a middle name — just like Mariah! Nick doesn’t call her Monroe, however, he shortens it to Roe.

He also talked briefly about them renewing their wedding vows in the hospital with Al Sharpton. He said it was amazing that Mariah was up for it. “It is amazing that less than 24 hours after giving birth [we] have another wedding.”

Tell us: Do you like the nicknames of Mariah Carey’s twin babies — Roc and Roe?