The ultimate quest tale gets a reboot in this summer’s 3D Conan the Barbarian. The new trailer has dropped and one thing’s for sure: Jason Momoa is not your mother’s Conan! No, he doesn’t actually have guns. Conan remains a tale of swords, sorcery and vengeance, and the Game of Thrones hunk looks to be one fierce, shirtless warrior. 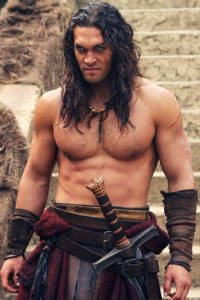 Jason Momoa is getting some grunts these days for his gritty work on HBO’s Game of Thrones, but in the new trailer for Conan the Barbarian, Lisa Bonet’s baby daddy goes shirtless, powerful and fierce. We can just imagine what it’s all going to be like in 3D!

For those who didn’t catch the 1982 musclefest starring Arnold Schwarzenegger, Conan the Barbarian is a sword-and-sorcery tale about a Cimmerian man who goes on a quest to avenge the murder of his father and the slaughter of his village. A fierce specimen, Conan cuts his way across the dark continent of Hyboria, battling monsters, the powerful witch Marique and the henchmen of the warlord who killed his father (Stephen Lang).

“When Darkness surrounds, when evil grows, a legend will rise,” warns the trailer — and in this case, that legend is Conan.

Along the way, Conan might just find love, as well. From what we can see in the trailer, sex, at the very least, seems to be in the cards.

The 1982 box office hit launched the acting career of bodybuilder Schwarzenegger. Like the former Iron Man, Momoa is a giant among men and completely ripped, making him a natural for the part.

If Momoa can act, however, that would be in direct contrast to Schwarzenegger’s brutish, monotone take on the role, but SheKnows imagines that would be an improvement. Word is the 2011 reboot will stick closer to the spirit of the original stories by writer Robert E. Howard, anyway.

The Conan the Barbarian Trailer