The top five of American Idol threw down this week, performing like there was no tomorrow! Unfortunately, for one there won’t be. Read on to find out how your favorites raised the bar in a week where everyone brought their A-game! 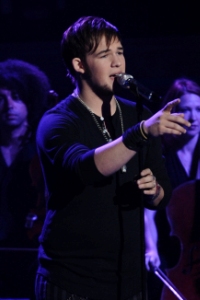 On this week’s American Idol, it all came down to who you liked, not who did the best — they all performed at levels we haven’t seen before.

Lauren Alaina, Scotty McCreery, Haley Reinhart, James Durbin and Jacob Lusk tackled the songs of then and now this week, with special mentor Sheryl Crow! So, what exactly does that mean?

Well, if you’re James Durbin it means you channel 30 Seconds to Mars’ song Closer to the Edge and smash it to pieces with a killer vocal! Jennifer Lopez and Randy Jackson hit the nail on the head with Durbin — he’s consistent! As Randy Jackson would say, “James is in it to win it!” For his then song, he shed his rocker side, and a few tears, with the beautiful ballad, Without You. It was not perfect by any means, but each of the judges reminded us of one thing — it’s really James’ competition to lose.

Things got a bit weird when Jacob Lusk took on Jordin Sparks‘ No Air for his now song. His voice was more than capable of taking on both ranges in the song but everyone agreed it was all over the place. He did much better with his rendition of Love Hurts. He completely went for it and got wrapped up in the moment. He needed that for any chance to stay in the competition.

Lauren Alaina could be the dark horse to rise up and snatch the American Idol title away. She sang her face off during her rendition of Carrie Underwood’s song Flat on the Floor! She went simple and powerful all at the same time for her second song, Unchained Melody. We could use a bunch of colorful words to describe her performance but we’ll let Steven Tyler wrap it up in a nice bow for you: “There’s nothing to judge!” She really was that good. 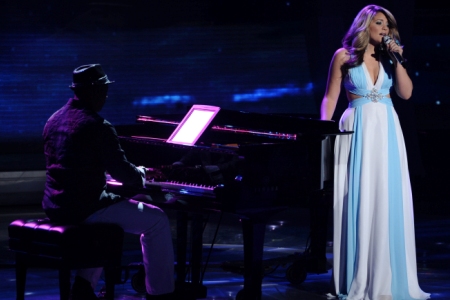 For Scotty McCreery, the songs of then and now meant two things — stomping the stage and reeling in the ladies! He went full blast with Montgomery Gentry’s hit Gone for his now song! Did anyone else see him boot, scoot and boogie across that stage like he owned it? Scotty “The Body,” as Ryan Seacrest calls him, tore it up this week. He slowed it down for his then song with Always on My Mind and we’d be lying if we said we didn’t swoon. He’s got this in the bag as far as a career goes. Guest mentor Sheryl Crow can’t wait for him to rock Nashville.

Haley Reinhart showed up big this week, especially for her second tune. She took on an unreleased Lady Gaga song first and it wasn’t her best choice — not because she didn’t kill it, but because it was unfamiliar. It actually didn’t sound very Gaga-esque with the added flavor of Reinhart’s signature growl. Her second song, The House of the Rising Sun, was amazing. Steven Tyler assured her that with one perfect song she could win the competition and while we’re not sure of that, we are sure this put her right back in the running.

It’s anybody’s guess as to who is going home Thursday night. From this point on it’s all about who you want to win — because no one is going to choke.