Lady Gaga performed the song Americano during her show in Guadalajara, Mexico. Find out all the details on her cool bilingual tune from her Born This Way album. 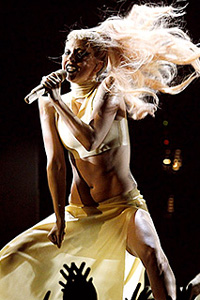 Lady Gaga picked the perfect place to debut her new song, Americano, off of her Born This Way album — Mexico! At her Guadalajara show, she surprised fans with the new song.

Lady Gaga discusses immigration in her new song, and she recently talked to Vogue about her controversial album, saying it is “a big mariachi techno-house record, where I am singing about immigration law and gay marriage and all sorts of things that have to do with disenfranchised communities in America. It sounds like a pop record, but when I sing it, I see Edith Piaf in a spotlight with an old microphone.”

Although the official video for Americano has not yet been released, you can hear the live performance of the song below. The song is sung partly in English and partly in Spanish.

“Mis canciones son de la revolucion/ Mi corazon late por mi generacion,” which MTV translates as “My songs are of the revolution/ My heart beats for my generation.”

She goes on to sing: “If you love me/ We can marry on the West Coast/ On a Wednesday/ En el verano o en agosto (in the summer or in August).”

Listen to the live version of Americano and let us know what you think.