Brandi Glanville’s life may be looking up — she’s set to star on Bravo’s second season of The Real Housewives of Beverly Hills. The cast is already filming scenes and production insiders are revealing possible Glanville plotlines. 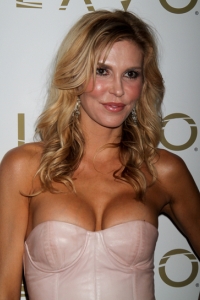 If you don’t know who Brandi Glanville is, don’t fret. She’s a model and make-up artist who married Cibrian in May 2001 but she’s most famous for being the jilted ex of LeAnn Rimes‘ new husband. It all started with affair rumors in April 2009, which Glanville at first defended. She then watched in horror as it all came crashing down around her with constant paparazzi photos and stories confirming her then-husband’s new infatuation with Rimes. Eddie filed for divorce in August 2009. The ultimate burn for Glanville was Eddie Cibrian’s marriage to LeAnn in late April 2011 — as in just a few weeks ago.

With news of Brandi’s move into the spotlight, we understand why she’d agree to be a part of The Real Housewives franchise. We think she deserves a little media TLC. If you’re curious about her storyline on the show, the general consensus from the rumor mill is that it will focus on the affair and Glanville’s journey to putting her life back together. Will Glanville use this as a way to throw some daggers at LeAnn on camera and call off their truce? No word yet, but we hope so. That kind of drama is always fun to watch.