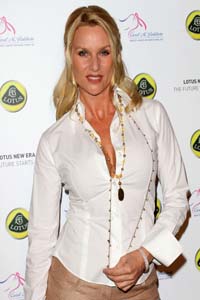 Desperate Housewives is getting pulled into a new drama, but this time it’s not playing out on Wisteria Lane. A Los Angeles judge has paved the way for Nicollette Sheridan’s wrongful firing lawsuit to go to trial.

“It’s clear to the court that this is something that needs to go to a jury,” White said after listening to both sides.

A Desperate Housewives writer backed Sheridan’s claims, saying that Cherry asked them to kill off her character.

“Mr. Cherry had expressed to the writers, in my presence, increasing frustration with Ms. Sheridan.”

Cherry’s attorney, Adam Levin, claimed that the decision to kill off Sheridan’s character happened way before the alleged incident.

The judge threw out Sheridan’s claims of sexual harassment and assault, but the actress’ lawyers can seek money for wrongful termination, battery and unlawful retaliation claims.

“I’m very happy that I’m being treated fairly,” Sheridan said after court. The trial is set to begin June 8.

Who do you believe: Nicollette Sheridan or Marc Cherry?