The Tudors star Jonathan Rhys Meyers spent 10 days in rehab in London. This is his fourth time in rehab for alcohol addiction. 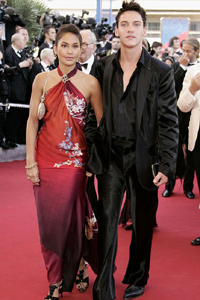 Jonathan Rhys Meyers, who plays Henry VIII of England on the popular show The Tudors, is back in rehab again. The star was seen in the VIP lounge at JFK airport last month and was drinking vodka drinks before boarding his flight to LA. The staff refused to let him fly, saying he was too drunk, and he soon went on a “foul-mouthed tirade.”

After this incident, his girlfriend, heiress Reena Hammer, gave him an ultimatum at the airport: “Rehab or I’m dumping you.” Hammer, who works with her father’s beauty company Urban Retreat, has been dating him since 2004.

He checked into rehab for 10 days — before leaving due to “work commitments.”

The 33-year-old actor was also arrested in 2007 at the Dublin airport for being drunk, as well as at the Charles de Gaulle airport in Paris after allegedly assaulting the bar staff. What is it with him and airport bars?

His publicist released the following statement: “After a non-stop succession of filming, Jonathan Rhys Meyers has entered an alcohol-treatment program. He felt a break was needed to maintain his recovery.”