Marie Osmond is getting married today to a man she’s married before — her first husband, Stephen Craig! The couple was married for three years. Hopefully, their second marriage will last a little longer.

Marie Osmond, 51, is walking down the aisle today for a third time, but the guy waiting for her at the altar has a familiar face. Osmond is remarrying her first husband, Stephen Craig. 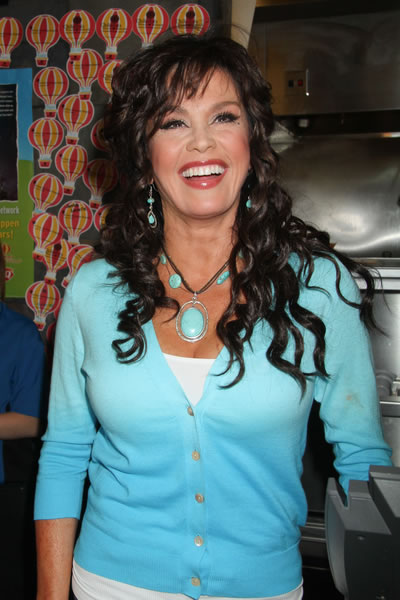 In 1986, Osmond married for a second time, this time to Brian Blosil, a music producer. The couple had seven children together. They divorced in 2007.

The bride and groom will exchange vows today at the Las Vegas Mormon Temple.

While Osmond rose to fame as part of the Osmond family, she made her mark starring with her brother on the variety show Donny & Marie in the late ’70s. She went on to become a successful country singer, then returned to acting.

Nowadays, Osmond is probably best-known for her Nutrisystem commercials, her stint on Dancing With the Stars and her QVC doll line.

The Osmonds have a squeaky-clean image, but Marie’s life has been fraught with ups and downs. In 1999, she made public her battle with post-partum depression. In 2010, her son Michael Blosil committed suicide by jumping out of the eighth-story window of his Los Angeles apartment.

Reportedly, Craig, a former Brigham Young University basketball star, was Osmond’s “rock” after her son’s death, and the couple rekindled their romance.

What other stars can you name who remarried former spouses? We can think of two. Tommy Lee and Pam Anderson, and Elizabeth Taylor and Richard Burton.

So what do you think of the news that Marie Osmond is remarrying? Happy news? Or disaster waiting to happen?

16 hrs ago
by Jessica Castillo