Jesse James’ new book American Outlaw is full of juicy little tidbits, and the latest excerpt the cheater is releasing is how he broke the news to Sandra Bullock that he had an affair — or five or six affairs. 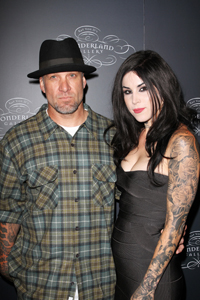 Jesse James really wants us to know what a disgusting human being he is. In case we weren’t quite clear on that fact he is releasing key parts of his autobiography, American Outlaw, including how he broke the devastating news on his cheating ways to now ex-wife Sandra Bullock.

The exploitative ex James writes that his house of lies began to crumble around him when he received a call from Bullock’s publicist that Michelle “Bombshell” McGee had sold the story of their affair to a tabloid.

James said he called Bullock into his office at West Coast Choppers to break the news.

Totally violating any semblance of privacy the couple shared, James describes Bullock’s reaction. “The feeling of shame and sadness that washed over me as Sandy began to cry was almost beyond measure… I didn’t touch her. I sat frozen in my chair, watching, as Sandy’s small body shook with sobs.”

Bullock then “rose to her feet. She unfolded her sunglasses and put them on her face… She walked steadily and purposefully to the front of the shop, opened the heavy, metal door. For a moment, the sunlight enveloped her. The door closed behind her, and she was gone,” James writes.

Does it leave a bad taste in your mouth to hear that James is revealing such intimate details about Sandra Bullock? Us too, but he really doesn’t care.

“I can’t worry about her anymore,” he said on Good Morning America. “I think I spent a lot of the past five or six years worrying about her… it’s time to make sure I’m happy.”

Bullock continues to take the high road, as she has all along, and refuses to dignify this mess with a response. James is now engaged to hot mess Kat Von D.