The situation just got a whole lot more interesting! Jersey Shore‘s lovable ab-master, Mike “The Situation” Sorrentino, is developing his own show with MTV! 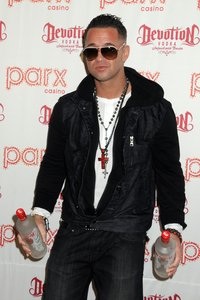 Did you really think MTV was going to leave Mike “The Situation” Sorrentino out of the party? Our favorite ladies’ man with an affection for GTL is getting his own deal!

The Situation will join MTV Jersey Shorecast mates Nicole “Snooki” Polizzi, Jenni “JWoww” Farley and Paul “DJ Pauly D” Delvecchio in the ranks of spin-off land! But before you go fist pumping with excitement, here are the early details.

According to The Hollywood Reporter, Mike “The Situation” Sorrentino signed on the dotted line to create a “potential series.” The pilot will be shot later on in the year, but no further details were offered.

MTV executive Chris Linn said in regards to the solo projects, “I think it allows us to expand out from the base of Jersey Shore without taking away from what Jersey Shore is. They would continue to be involved in any potential future cycles of Jersey Shore.“

One thing we do know for sure is that season four of Jersey Shore will begin filming soon — in Italy! This is going to be good! We can look for Snooki, JWoww and Pauly D’s shows to air sometime in 2012.

What do you think of Mike “The Situation” Sorrentino’s new solo endeavor? Will you watch if it makes it on air?