January Jones is pregnant and no one will admit who the father is — could it be her ex Jason Sudeikis? 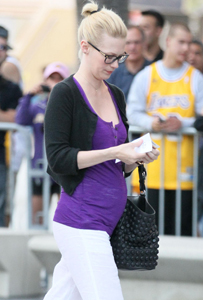 It’s a mystery for the ages: Who got January Jones pregnant? The Mad Men actress is pregnant and she isn’t talking about her baby daddy, but the most likely suspect is her recent ex Jason Sudeikis.

In fact, when asked about the paternity issue by The Washington Post at the White House Correspondents’ Dinner, Sudeikis got awfully shifty-eyed.

“I’d rather — yes but no,” he confusingly replied when asked if he had any comment on the matter.

Of course, a source told Us Weekly that Jones’ desperation for a baby is what drove Sudeikis to dump her in the first place.

“She told him she wanted kids and it turned him off,” said the insider. “Jason was bummed out she was on the mommy track.”

So who else could be the baby daddy? Last year Jones was linked to Bobby Flay and has also dated Adrien Brody, Jeremy Piven, Ashton Kutcher and Josh Groban.