Another dancer has left Dancing With the Stars and boy are we going to miss her! Kendra Wilkinson will no longer be shaking her rump for the mirror ball trophy.

This week’s Dancing With the Stars gave us the feel-good fun of the team competition, but someone always has to go home. This week our favorite reality show maven, Kendra Wilkinson, danced her final dance! That means we’ll only get to see her “Go Kendra” dance when she breaks it out on E! 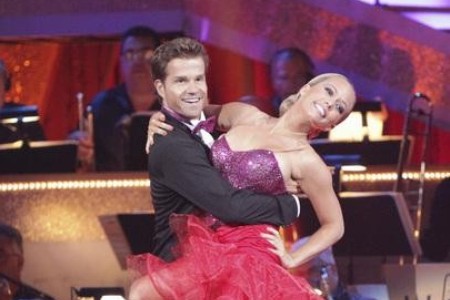 What other fun things went down on the Dancing With the Stars results show? Well, Nicki Minaj performed her hit single Moment 4 Life, which actually sounded pretty darn good! James Blunt also showed up from out of nowhere and rocked the house with his guitar! We forgot how unbelievably talented he is.

We also saw two very interesting stars joining Kendra Wilkinson in the bottom three — Kirstie Alley and Chelsea Kane. Chelsea Kane has never really performed poorly — it’s just been a matter of liking her. Kirstie Alley seems to be a fan favorite, which we thought would carry her through regardless of her performance.

Either way, Chelsea and Kirstie were fine. Besides, you never really know if the dancers who end up safe from the bottom are really the lowest scorers. They admit that right off the bat!

It was poor Kendra Wilkinson, who recently came into her own, that had to leave. She admitted she lasted seven weeks longer than she thought. Now she’ll go back to being a mom! She’s a class act.

That leaves Romeo, Kirstie Alley, Ralph Macchio, Hines Ward and Chelsea Kane up for the mirror ball! Do you think Kendra Wilkinson deserved to leave Dancing With the Stars?