Psst — did you hear the one about Glee? Fox’s hit show fueled the old gossip mill in the new episode, Rumours, dedicated to the Fleetwood Mac album of the same name.

A juicy rumor always has to do with who’s cheating on who! Did you really think it would be any different for Glee? The show’s all-new episode, Rumours, spun gossip and scandals galore, leaving us all wondering — who’s really crushing on who? 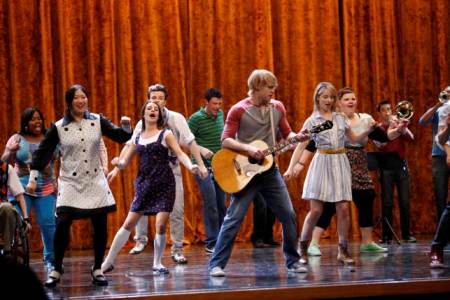 Sue Sylvester (Jane Lynch) brought back the school newspaper, the muckraker, giving its motto a whole new spin: “If I heard it, it’s probably true or something.” This brought on a whole new level of mistrust and deceit fueled by rumors!

In order to get the kids past the rumors, Will Schuester’s (Matthew Morrison) new assignment was simple — sing a song from Fleetwood Mac’s album Rumours.

Some of the biggest rumors started? Well, there was a Brittany (Heather Morris) and Santana scandal, a Sam (Chord Overstreet) hookup and rumblings that Mr. Schuester is leaving the glee club.

The reasons these rumors got started were pretty funny! Brittany happened to mention Santana played for another team (she meant she wasn’t on the Cheerios anymore), Sam was seen at a hotel with Quinn (Dianna Agron) and Kurt (Chris Colfer), and Sue printed Mr. Schue was leaving in the newspaper.

Kristin Chenoweth was brought back as April Rhodes and her original intent was pure, until we found out it was the doing of his ex-wife Terri! April showed up to get Mr. Schue’s help with a new Broadway show. Turned out, Terri really brought April there to get Mr. Schue away from the kids, by getting him to go on the road with her.

Artie got upset with Brittany and called her stupid — something he’s never done before. This split the duo and sent Artie into a fantastic version of Never Going Back Again. 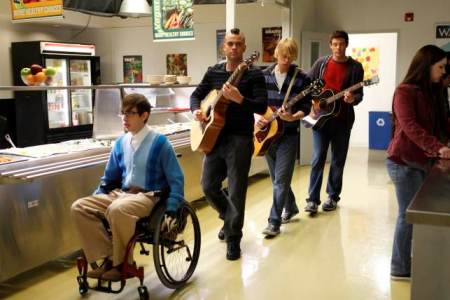 Meanwhile, Santana put a smile on Brittany’s face with a serenade of Songbird.

Rachel (Lea Michele) and Finn (Cory Monteith) perform a stakeout, trying to prove Sam is messing around with Quinn. After the sleuths discover both Kurt and Quinn at a hotel with Sam, they confront everyone.

Both Quinn and Kurt deny they’ve done anything wrong. Quinn and Finn got sassy with the song I Don’t Wanna Know. Quinn demands Rachel and Quinn never sing together again — not even at nationals!

Emma was the one to actually push Will to go with April Rhodes, which is how it got into the newspaper via Sue. Who are we kidding? Will wants to go, but he wants to guide his kids more! He’s staying put!

Glee: How to clear up a rumor

The kids got into it over who Sam was seeing on the side and the kid just snapped. He finally told the truth. His dad lost his job and his family was staying in a hotel. Kurt was giving him clothes and Quinn was helping him babysit! See how ugly rumors can turn a sad situation sadder!

Rachel and Finn showed up at Sam’s motel room with a peace offering of his hawked guitar back and a few other charitable goods.

It looks like next week is the big Glee prom episode! Will you be watching?