Twilight author Stephenie Meyer’s new movie The Host has found its alien girl with actress Saoirse Ronan. Who is Saoirse Ronan and does she have the chops to be the next supernatural megastar? 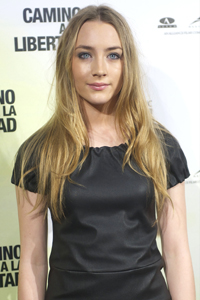 Irish actress Saoirse Ronan, 17, has been cast to star in The Host! For those Twihard fans that are already feeling depressed as Breaking Dawn hits screens this year and the Twilight Saga starts to come to an end, get ready for your next obsession: The Host. You will not find hunky vampires, however, you will find mind-controlling aliens and an incredible love triangle.

Based on Stephenie Meyer’s novel The Host, the movie is about an alien species, called Souls, that have human hosts in which they erase their personalities.

Ronan would play the lead role of Melanie Stryder, a free human who battles with the alien called Wanderer that is trying to take over her consciousness. Of course, you can expect a love triangle — and this one is a doozy.

“As Melanie fills Wanderer’s thoughts with visions of Jared, a human who still lives in hiding, Wanderer begins to yearn for a man she’s never met. Reluctant allies, Wanderer and Melanie set off to search for the man they both love,” reads the synopsis.

No word yet on who will play the character Jared, however, Jack Samuel is rumored to be up for the role.

The Oscar-nominated actress definitely has the acting chops to pull it off, having starred in Atonement, Hanna and The Lovely Bones.

Meyer recently spoke with SheKnows (prior to Ronan being cast) and said what kind of actress she thought could play the lead for The Host. “The real problem is how on earth do you do Melanie/Wanderer? What? Voice-overs, do you have her talk to herself? They have the same voice. I think first you need an Oscar-level actress, secondly [laughs], you need someone with a really good idea of how to portray that visually,” she said.

Tell us: Do you think Saoirse Ronan is the right choice to play Melanie in The Host?