In a new interview, Jesse James, one of the most hated men in America, accuses ex-wife Sandra Bullock of refusing to let him see the son they started adopting together. Bullock is raising her son Louis as a single mother, but James says he’s brokenhearted. 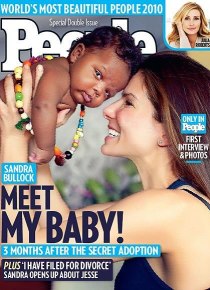 Jesse James has returned to the spotlight, and this time it’s to slam his ex-wife, Sandra Bullock, over her adopted son Louis.

After James was exposed by a parade of women as a serial cheater who couldn’t stay faithful to America’s sweetheart, James hightailed it out of Hollywood and relocated to Austin, Texas, to be closer to Bullock and Louis.

James and Bullock started adoption proceedings together, but after the Jesse James cheating scandal, Bullock decided to adopt Louis on her own and is raising him as a single mother.

Now engaged to Kat Von D, James claims Bullock won’t give him the time of day. Not only has she not spoken to James’ daughter Sunny in months, he says, but she is blocking him out of Louis’ life.

“I think, you know, a marriage ending, all this crazy stuff… that was like a lesson to work on myself and fix what’s wrong with me,” James says.

“You know, the painful stuff, like with Louie,” he says. “I could only cry so much about him until I have to, like, suck it up and keep a stiff upper lip, and realize, hey, I have three kids that I do have.”

Maybe in addition to those anger management classes, Jesse James needs to take some resentment classes. He cheated on Sandra Bullock repeatedly. Can you blame her for moving on and starting over?