Will Ferrell made good on his promise to shave off Conan O’Brien’s beard, in a hilarious event he dubbed beardpocalypse. 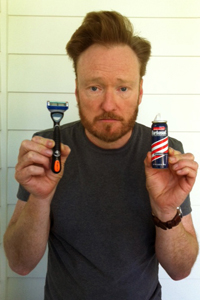 Conan O’Brien has been sporting a ginger colored beard since he left his post at NBC, felt a little rebellious and moved over to TBS. Will Ferrell, however, is not so fond of the beard, calling it a “red mistake” and said he would shave off the beard — and he did just that during a Monday night appearance on Conan.

Conan hinted at what was to come, tweeting:

“Will Ferrell keeps driving past my house in a tiny French car, laughing and waving a razor. He is a cruel man with lots of free time.”

And, referring to the death of bin Laden:

“Yesterday, we took care of one maniac with a beard. Today, Will Ferrell will take care of another.”

Before the shaving begins, Ferrell takes a “hit” of the blue stuff, which is supposed to be disinfectant, tongues the comb, and then gets ready to shave.

To set the mood, Ferrell gives Conan a stack of 1970s Playboy magazines for reading material. Thumbing through them, Ferrell jokes, “Not going to find anything shaven in there, my friend.”

Armed with his razor or as Ferrell calls it, Excalibeard, he first shows him some shaving style options (love caterpillar, gay illusionist, Hitler) and gets to work.

How did it turn out? “That’s terrible!” Conan says, examining his patchy beard, before taking a swig of the blue disinfectant to help ease the pain. Luckily, Conan gets some “professional” beard help during the break.

Tell us: Do you like Conan with or without the beard?