Sean Penn and Scarlett Johansson took their relationship public this weekend with a full-on PDA session in Washington D.C.

Scarlett Johansson and Sean Penn are, like, totally in love — and they took every opportunity to show it off in Washington D.C. over the weekend. The couple even engaged in a “shocking” PDA while at the superstar-packed White House Correspondents’ Dinner on Saturday night. 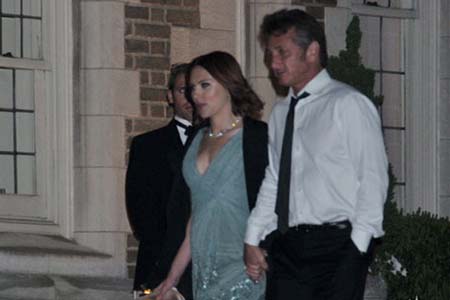 “She [Johansson] plopped down in his lap, and they were kissing. It happened right as the main course of the dinner was being put on the table,” a source told Us Weekly.

Apparently they even escaped for an hour and Penn returned with some, um, tousled hair. However, that wasn’t the end of the gross-out session.

“Scarlett was pawing at Sean, holding on to his hip while he was smoking. She gave him a short kiss. But then they took a walk some 30 feet away, broke off from the group and kissed some more,” the onlooker continued.

And the PDAs continued at the Vanity Fair after party.

“Around 1 a.m. Sean showed up and he and Scarlett were immediately side by side for the rest of the night. When they were walking out the door, Sean stopped her, took off his jacket and put it on her shoulders, saying, ‘It’s cold out there,'” another onlooker said.

Well, we’re not really surprised — Johansson is known for her penchant for public displays of affection. Remember that “incident” she had in an elevator with actor and daddy-to-be Benicio del Toro a few years back?

Good for them, we suppose. After all, the “honeymoon” phase of a Hollywood relationship doesn’t last very long, so they should probably enjoy it. Just keep the public displays to a minimum, kids, people prefer to keep their dinners down.

Read on for more Scarlett Johansson