Playboy pinup model and Hollywood actress Yvette Vickers was found in her Los Angeles home with her remains mummified, as police believe she could have been dead in her home for more than a year! 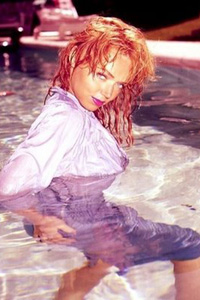 Yvette Vickers was a sexy siren in the 1950s, appearing in Playboy and B-movies such as Attack of the 50 Foot Woman and Attack of the Giant Leeches. She had many fans and even counted Cary Grant and Jim Hutton, the father of Timothy Hutton, as her boyfriends. So what happened?

Friends and neighbors said that Vickers, 82, had gotten paranoid and was somewhat of a recluse.

Neighbor Susan Savage gave the Los Angeles Times insight into Vickers’ last days. “She kept to herself, had friends and seemed like a very independent spirit,” she said. “To the end she still got cards and letter[s] from all over the world requesting photos and still wanting to be her friend.”

Vickers was married and divorced twice, but apparently had no children.

Boyd Magers, editor and publisher of Western Clippings, said that Vickers was “bright, intelligent” but that she did grow “paranoid” as she got older and feared she was being stalked.

Neighbors started noticing uncollected mail and cobwebs outside, and finally called police to her “dilapidated” home last Wednesday. Police then discovered her mummified remains — indicating she could have been dead in her home for more than a year.

“We’ve all been crying about this. Nobody should be left alone like that,” Savage said.