CBS Evening News fans are about to start spending a lot of time with Scott Pelley. The 60 Minutes correspondent has been named as the replacement for Katie Couric, and will begin his news desk duties on June 6. 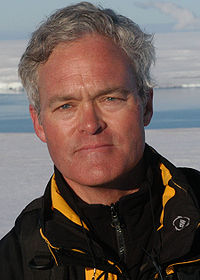 The word is out! Katie Couric is moving on from CBS Evening News and Scott Pelley is taking over.

While we’re sad to see Katie go, you have to admit Mr. Scott Pelley is qualified for the job. The 60 Minutes correspondent has been in the news business for over 21 years.

“I am delighted to join the terrific team at the CBS Evening News,” Scott Pelley said in a statement. “It’s a privilege to work alongside the most gifted and talented journalists in the industry.”

CBS News chairman Jeff Fager said in a statement, “Scott has it all. He has the experience, the credibility and he is among the very best reporters ever to work at CBS News. We like to think of CBS News as the ‘reporter’s network’ and I can’t think of anybody in this business better suited for the anchor chair than Scott.”

While praise and awards for Scott are plentiful, the 53-year-old has been known to get into trouble on occasion. In 1998, Scott Pelley was picked up off his feet and physically thrown out of the Kremlin after shouting a question to President Clinton at the end of a meeting with President Boris Yeltsin.

Sounds like evening news could get a little more interesting!

No word yet on where Katie Couric is headed off to, but rumor has it the 54-year-old’s team has been looking to land a deal to give Katie a daytime talk show and a news operation platform.

Best of luck to both Katie Couric and Scott Pelley on their new ventures!