Charlie Sheen gives his side of the story about the 1990 incident in which Kelly Preston was accidentally shot in the arm and leg with his gun. The Cliffs Notes version? It was her fault! 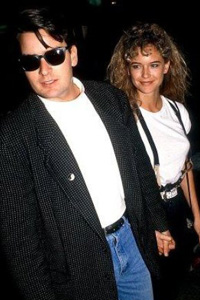 Before Brooke Mueller and Denise Richards, Charlie Sheen was engaged to Kelly Preston, however, their engagement was cut short after she was shot in the arm and leg by his gun.

During a recent My Violent Torpedo of Truth tour, Sheen gave his side of the story about what happened the day Preston was shot. He told the audience that he was drinking coffee downstairs when he heard a gunshot.

He then saw Preston standing at the top of the stairs, naked and covered in blood. She had apparently picked up his pants in the bathroom and a loaded gun fell out of his pocket and was discharged. The bullet ricocheted off the toilet and hit it. She had shrapnel in her wrist and ankle.

Sheen went on to say he knew he would be blamed for it — although I’m still foggy as to why he had a loaded gun in his pocket!

Even though their engagement didn’t last, Preston doesn’t seem to harbor ill feelings towards Sheen. She recently told People magazine that he “really is a great man.”

“We were together for a year and he wasn’t drinking and he wasn’t doing drugs,” Preston said. “There’s a beautiful person in there. I think there’s a way back for anyone. I always have hope and my prayers are with him.”