Chris Brown channels Michael Jackson in his newest song, She Ain’t You, from his F.A.M.E. record. Check out the music video for She Ain’t You and watch Breezy bust out the MJ dance moves!

Chris Brown’s new music video for She Ain’t You opens with a tribute to Michael Jackson: “Dedicated to my biggest inspiration of all time… I Love You. RIP. Michael Jackson. 8/29/58-6/25/09” 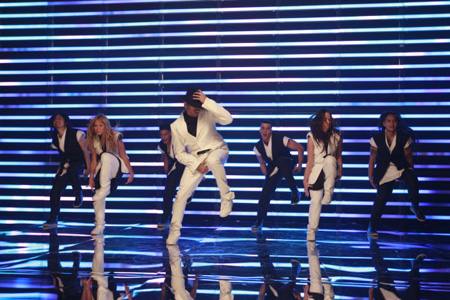 Directed by Colin Tilley, who also worked with the Cataracs, the new song off Brown’s F.A.M.E. album samples tracks from Jackson’s Human Nature — and he also samples some of his dance moves.

What can you expect from She Ain’t You? A cool song and hot dance moves!

Brown is having a hard time enjoying the success of his new song, as he is battling the flu.

“She ain’t you video coming ASAP!!!! I’m excited although I got the flu!!! Leggoo (cough cough),” he tweeted. “Still feel like (expletive). Doctor told me I had the flu and it turned into a bacterial chest infection. Super meds!”

Brown’s new song, She Ain’t You, follows up his song Look At Me Now which stayed at the top of the Billboard chart for six weeks.

Watch Chris Brown‘s She Ain’t You and let us know what you think!