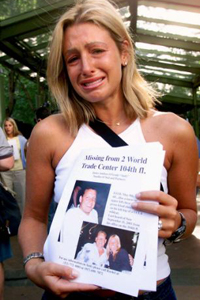 Rachel Uchitel didn’t become a mistress to the stars for no apparent reason. The former number one girl of Tiger Woods was once happily engaged to successful investment banker James Andrew O’Grady — before he was killed in the World Trade Center during the September 11, 2001 terrorist attacks, masterminded by Osama bin Laden.

Just a few days later, a photo of a tearful Uchitel clutching a missing poster with her fiance’s photo was splashed across the cover of the New York Post.

“The last time the country really came together as one, as a family, to support one another and put aside any internal conflicts was September 11, 2001,” Uchitel said in a statement. “With the announcement that bin Laden has been killed, America has finally come together again as one, but in celebration rather than in mourning. This is the biggest news we have received as a country in almost 10 years. Now we Americans finally have justice and maybe we can all sleep just a bit better at night. Andy would be so honored to know he’s part of history as an American hero for his sacrifice on that day. He’s celebrating for sure right now with all those he died with and that makes me so happy.”

The 36-year-old Uchitel, who in addition to Tiger Woods was also linked to David Boreanaz, now lives with her 26-year-old boyfriend Matt Hahn.