It’s down to six on Dancing With the Stars which means one thing — team dance time! 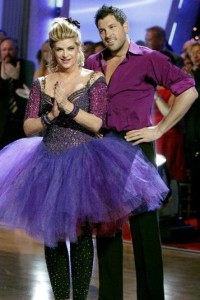 We love it when Dancing With the Stars breaks out the team dance week! Especially when leader board greats Chelsea Kane and Hines Ward play team captains!

Here’s how Dancing With the Stars shaped up this week.

The team dances were good and bad on so many levels, which is what makes them awesome to watch! Who doesn’t love watching three teams who’ve never danced together fight their way through a routine as a cohesive unit?

Ralph Macchio made a slight blunder on Team Chelsea Kane during the cha cha cha, but it was all in fun. Team Hines Ward didn’t need to rehearse, they could have just hid behind his blinding white smile. They each managed to muster up 30 out of 40 points. What does that mean? Absolutely nothing.

The pairs are what really got our attention.

Chelsea Kane and Mark Ballas just couldn’t hold the leader board this week, but still had a strong showing after Ward and Macchio’s tie for the top. Unfortunately, Kane’s smile isn’t going to keep her at the top.

Kendra Wilkinson and Louis van Amstel went way too difficult in their tango in our opinion, which put them at just above the bottom of the pack. Kendra was coming into her own as of late! You can’t just give her a complete technical overhaul and expect her to kill it right out of the box.

Maksim Chmerkovskiy and Kirstie Alley’s intro package detailed a small breakdown Alley had in preparation for this week’s competition. Alas, she dried her tears and delivered a flat jive to mixed reviews. Len Goodman called it “uneventful,” while Carrie Ann Inaba seemed to like the couple. She managed to fall right to the bottom with Romeo and Chelsie Hightower whose samba did not represent Romeo at all.

Romeo can attack a dance when he wants to, but something was missing. He had the swagger coming out of his mouth but it didn’t transfer to his feet.

Who do you think is going home on this week’s Dancing With the Stars? Romeo, Kirstie Alley, Ralph Macchio, Kendra Wilkinson, Hines Ward or Chelsea Kane?