After the extreme dieting and exercise required for her Black Swan role, Natalie Portman admits that the movie Thor helped prevent a breakdown!

Natalie Portman’s Oscar-winning performance in Black Swan required eight hours of training per day and a strict diet that resulted in a 20-pound weight loss, so she admits that her role in Thor was a welcome relief. 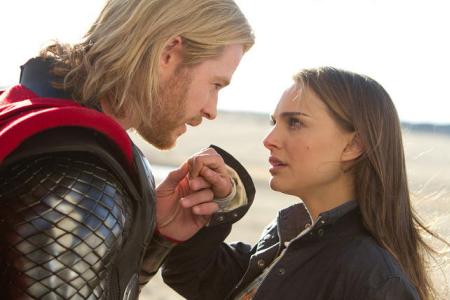 She told The Sun that Thor “probably delayed the onset of a total breakdown from the efforts of doing Black Swan.”

She said the set of her new movie was a stark contrast from Black Swan. “We got nice long breaks and I got to read in my trailer which was very comfortable and has a bed. I could eat whenever I wanted and train whenever I felt like it,” she said. “Also I went on to do the Ivan Reitman comedy No Strings Attached as well. They didn’t require a lot of research ahead of time. They didn’t require any specific physical training. Both were very fun projects, surrounded by friends.”

She started training for Black Swan a year before filming! “I think it was just the physicality of it all that was the most extreme. I mean, I had never gotten that much training — to be doing five-to-eight hours a day of [it] was really a challenge,” she told Us Magazine.

The actress is pregnant and expecting her first child with fiancé Benjamin Millepied any day now, so hopefully she is now getting plenty of R&R!

Stay tuned for our exclusive video interviews with the entire cast of Thor, including hunky Chris Hemsworth and Anthony Hopkins!