Demi Moore and Bruce Willis’ 17-year-old daughter, Tallulah Belle Willis, was cited for alcohol possession over the weekend. Is the young actress heading down a bad path? 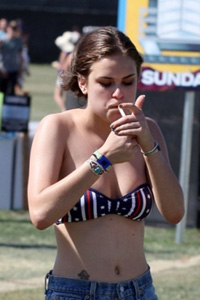 Tallulah Belle Willis is accustomed to being in the spotlight for being the daughter of Demi Moore and Bruce Willis (and the stepdaughter of Ashton Kutcher), but she undoubtedly does not want this kind of attention.

Tallulah was the only one that was a minor (her other friends must have been 18 or older), so the cops could not release her without an adult. She reportedly called dad Bruce, but it was Demi who actually picked up her daughter. Something tells me Demi might be wishing she was still raising her daughters in small town Idaho instead of Hollywood, California.

Tallulah made headlines a couple of weeks ago at the Coachella Music Festival. Wearing a bikini top and low-cut jeans exposing a tattoo, she was spotted smoking cigarettes, one after another.

Bruce and Demi’s middle daughter, 19-year-old Scout, stays out of the spotlight as she studies at Brown University, however, both Tallulah and Rumer Willis are following in their parents’ footsteps by acting. Tallulah has appeared in The Scarlet Letter and The Whole Ten Yards.

No word yet from Bruce, Demi or Ashton Kutcher on Tallulah’s run-in with the police.