The death of Osama bin Laden took over Sunday night primetime, not to mention Twitter, Facebook and 9/11 hot spots in New York and DC. Just hours after President Obama’s announcement about taking down the Al Qaeda leader, word comes that The Hurt Locker‘s Kathryn Bigelow was already working on a bin Laden movie and Paramount has a bin Laden script floating around, too. 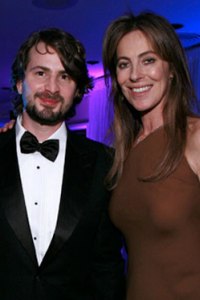 The first project getting buzz today comes from The Hurt Locker‘s Oscar-winning director Kathryn Bigelow and her collaborating screenwriter Mark Boal, according to THR. When last night’s news broke, the duo behind Best Picture Oscar-winner The Hurt Locker was already getting into casting their upcoming action thriller about a failed Black Ops mission to capture bin Laden in the mountainous border region between Pakistan and Afghanistan.

Tweak that story to include a successful mission and a Pakistani manse, and they may still have a movie! Or perhaps they’ll just make smaller tweaks to reflect the real world ending.

Joel Edgerton, who was up for The Bourne Legacy and Snow White and the Huntsman, is now circling the project, according to a few sites. Word was he was the top runner on Friday, but recent events may just open up the pool of interested actors.

The second Osama film is a previously stalled effort to bring Jawbreaker to the big screen. Back in 2006, Paramount optioned the tell-all from U.S. intelligence operative Gary Berntsen, which detailed the December 2001 hunt for the Al Qaeda leader and why it failed, according to Deadline.

The Jawbreaker script has worked its way through several incarnations since then, from the newest vehicle for Tom Clancy’s heroic Jack Ryan (The Hunt for Red October, Patriot Games, Clear and Present Danger and The Sum of All Fears) to Oliver Stone’s follow-up to his film World Trade Center. No projects have managed to get off the ground, but perhaps recent events will light this effort again.

SheKnows just wonders whether moviegoers — or movie of the week watchers — will turn out for an Osama bin Laden action flick. Is it too close to home? Or, now that he’s been taken down, is it a story Americans want to watch? Leave a comment below to let us know what you think.