Charlie Sheen has pledged to help out the Alabama tornado victims by planning a fundraiser this week. Is this the new and improved Charlie Sheen — or a publicity stunt to makeover his image? Either way, not all Alabama residents want help from Sheen. Not winning!?

On the heels of his divorce being finalized from Brooke Mueller, Charlie Sheen has told the Associated Press that he is planning a fundraiser to help the tornado victims in Tuscaloosa, Alabama. He hopes to give “money, hope, faith and healing,” he said. 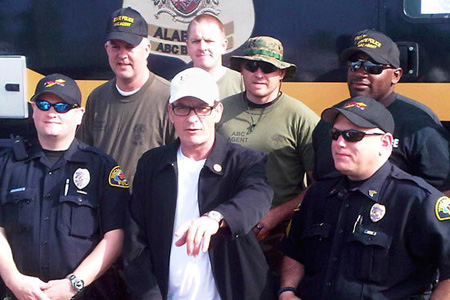 As he travels throughout Alabama with one of his goddesses and Todd Zeile, a former baseball player, Sheen tweets:

“I’m in Tuscaloosa. It’s beyond words. Info coming soon on how you can all help.”

Sheen made an appearance at Holt High School, where many evacuees are staying, and talked to the tornado victims. He also spoke with FEMA workers and police in Alberta City, as well as Tuscaloosa Mayer Walt Maddox.

He said in an interview that he wanted to use “his celebrity status for positive results.”

“I’m hopeful that I can do whatever I can to provide some compassion, hope,” he said.

Not all Alabama residents are buying it, however.

“Why, on God’s green earth, would anybody want Charlie Sheen to come? What can he possibly bring to contribute to the effort… now is NOT the time for a celebrity spectator. Tuscaloosa has enough to deal with just trying to find the missing people and cleaning up the city. If he is coming to pick up a chainsaw and work HARD for a week or so doing WHATEVER he’s told with no cameras around then the rehab might be good for him. Otherwise, he’s just going to be in the way,” commented one person.

“One disaster clinging to another disaster!” quipped another.

Others, however, are thankful and will take any help they can get. “I live in Tuscaloosa and you don’t know how MUCH we appreciate your help and anyone elses! GOD bless you!” tweeted Megan_345.

Tell us: What do you think of Charlie Sheen helping out in Alabama?