Donald Trump has been an outspoken critic of President Barack Obama, demanding to see his birth certificate in a rumored push for his own bid for presidency. The Donald managed to reign in his ego today to actually congratulate President Obama on the death of Osama bin Laden. Anyone else surprised Trump didn’t find a way to take credit for the death of Osama bin Laden? 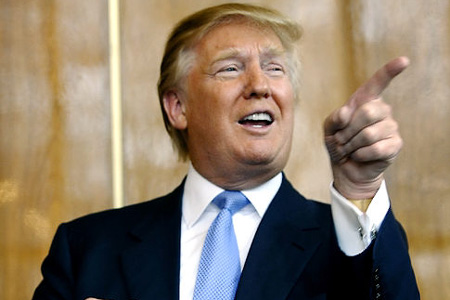 Now we know that that “better stuff to do” meant the capture and take-down of Osama bin Laden.

Trump took to his Twitter today to congratulate the armed forces and President Obama:

“I want to personally congratulate President Obama and the men and women of the Armed Forces for a job very well done. I am so proud to see Americans standing shoulder to shoulder, waving the American flag in celebration of this great victory,” he tweeted. “We should spend the next several days not debating party politics, but in remembrance of those who lost their lives on 9/11 and those fighting for our freedom. God Bless America.”

Not everyone is buying his sincerity, however. “Donald Trump will probably want to see Osama Bin Laden’s Death Certificate — the long form one!” tweeted @Beauty411.

Prior to the announcement of bin Laden’s death, President Obama and several comedians, including Saturday Night Live head writer and Weekend Update host Seth Meyers, enjoyed poking fun at Trump at the annual White House Correspondents’ Dinner on Saturday night. And yes, Trump was at the event!

“No one is happier… no one is prouder… to put this birth-certificate matter to rest than the Donald,” President Obama said during his speech. “And that’s because he can finally get back to focusing on the issues that matter, like: Did we fake the moon landing? What really happened in Roswell? And where are Biggie and Tupac?”

“Donald Trump has said he’s running for president as a Republican — which is surprising because I thought he was running as a joke,” Meyers quipped during his speech.

Trump sat in the audience without cracking a smile!